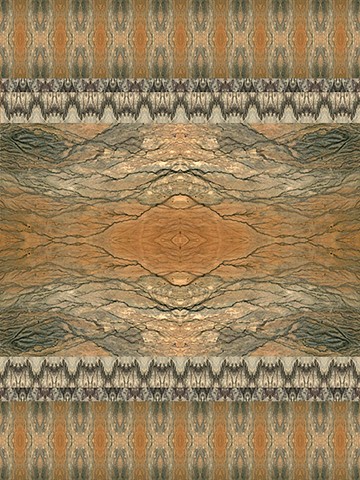 My current work interrogates issues surrounding the artificiality of borders and the ways in which socio-political lines define economic possibilities and life potential for those on either side. This project has evolved from a two-decade study of issues surrounding the US - Mexico border. My reading and research led me on a quest for a single map of the entire US-Mexico border. I wanted a facsimile of the border I could walk along and closely analyze. When I could not find one, I decided to make my own, and I started digitally stitching together satellite images of the border with the intent of creating my own visual atlas.

I have digitally combined satellite images to create a visual atlas of the US - Mexico border. Arranged in five volumes, each corresponding to one of the northern Mexico states, the images are printed on 10" x 120" sheets of paper. Inspired by the Japanese tradition of Kintsugi, where broken ceramics are repaired with gold-infused lacquer so as to draw attention to the beauty in the fracture, I am defining the US - Mexico border with copper leaf. Arranged vertically on the wall, these images evoke the steel slats that are used to construct the border wall in many locations.

An offshoot of this project is a series of images inspired by motifs found in indigenous artwork of the American Southwest and Northern Mexico. I have selected photographs of landscape features from each side of the border, discovered while creating the border atlas. I have recombined these images into larger digital weavings. These works are about the size of a Navajo saddle blanket, a common way in which weaving traditions spread throughout the Southwest. The recombined images are a melding of the local colors and textures of smaller border regions, paired with written vignettes describing issues impacting life in each specific area.

A third element of this project involves photographic images of border cities thought to be among the most dangerous in the world. Many of these images are blurred, evoking the types of snapshots we take through the windshields of our cars. Printed to postcard size, these intimate images are grouped in large grids, mimicking the geometry of city street plans. Unlike the immigration peak of the 1990s, migrants coming to the US today are not economic immigrants. They are here because of policies and activities condoned and/or conceived of by the U.S. government. In my work I strive to turn up the volume on this discussion, and increase awareness of the myriad reasons why individuals leave everything to make a dangerous journey with no promise of a pay check or refuge at the other end.